Skip to content
Yay, its reveal day again. I’ve realized that over the last couple of months I get really excited as the SRC reveal day approaches. This month is no different. I can’t wait to see what everyone’s cooked up. The Secret Recipe Club is so much fun. It started off as the brain child of Amanda from Amanda’s Cooking and because it got so very popular and grew so fast, we’ve been split into groups. I’m in Group B and Tina from Mom’s Crazy Cooking is our hostess. If you’d like to participate or see our previous reveals, stop by at The Secret Recipe Club.

This month I was assigned Julie’s blog, Little Bit of Everything. ‘Hi Julie’! I had so much fun going through her blog. You simply have to head over. There were so many things that I wanted to try. And you know something, she dabbles not just in food, but like her blog name suggests, in a little bit of everything. I absolutely love the pictures of her garden. She has a series called In My Garden  where once a week she posts some of the most gorgeous pictures. I absolutely love these kind of pictures and have tonnes of such images captured from when I travel. I’ve just recently launched Shutterbug Sundays on my blog in an attempt to gather such clicks in one place.

But I digress. Back to my pick for this months SRC. I saw Julie’s version of the World’s Best French Toast and I was hooked. I knew I was going to try this out. I’ve seen a few versions of Stuffed French Toast on some television shows, but I’ve never tried them. This was the perfect opportunity. I’ve actually combined ideas from a couple of Julie’s recipes, her Peanut Butter Banana Muffins and the World’s Best French Toast to come up with my very own version of Stuffed French Toast. This is a wonderful treat to serve up for breakfast on the weekend or a holiday. I think its a really healthy breakfast treat. It has absolutely no sugar in it. It gets its sweetness from the plantain and the honey. I love how this turned out. There are so many wonderful combinations that can be used to tweak a treat like this. I know I’ll be trying many more. Thank you Julie for the inspiration. 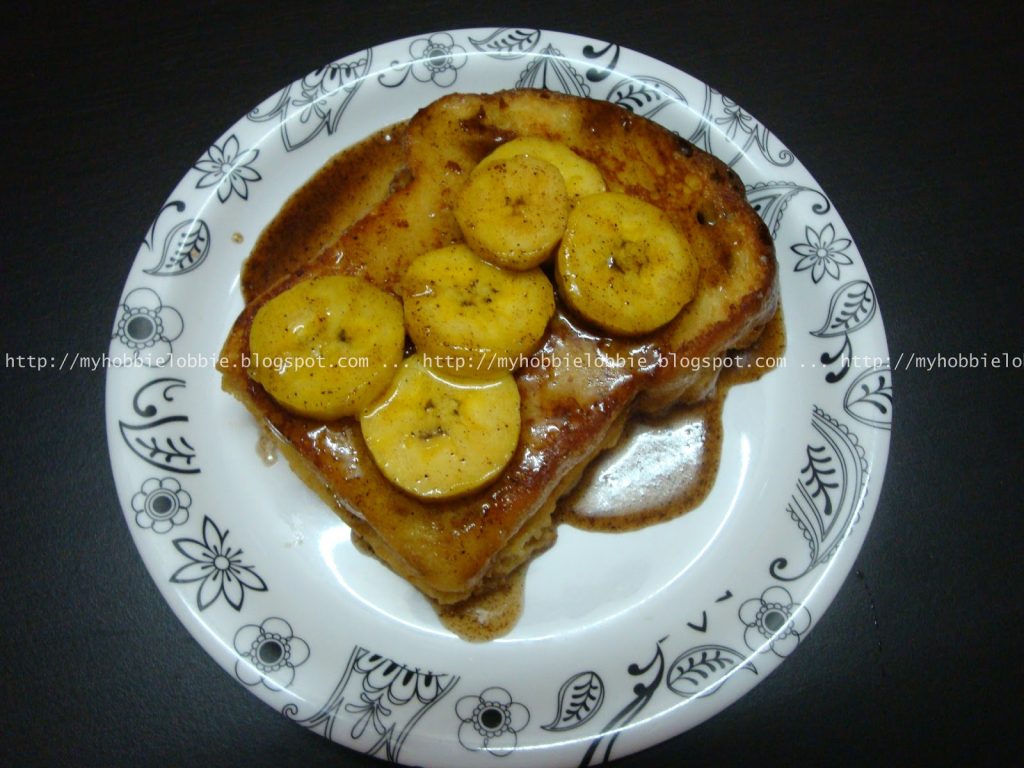 Spread the peanut butter on both the slices of bread and sandwich them together.

Beat the egg, milk, vanilla and salt in a bowl.

Dip the peanut butter sandwich in the milk and egg mix and let it soak it up. Turn it over so that the other slice soaks up some of this yummy stuff too.

Place a dollop on butter on the pan. When it has melted, fry the french toast till nicely crusted and browned to your liking. Place it on the serving plate.

Once the french toast is done, using the same pan, add a touch of butter.

Add the honey and cinnamon and stir well. When this mix starts bubbling, add the banana slices and cook it off for a minute or two. Avoid overcooking or the bananas will get too soft and mushy.

Pour this sauce over the French Toast and sit yourself down to a wonderful, healthy treat for breakfast.

If desired, you can sprinkle some icing sugar on top before serving.

Do stop by and check out what the other members of Group B have made this month.